With almost two decades of existence, Dofus is one of the most unique, endearing and ambitious French creations. A video game work willingly focused on transmedia, community in the best sense of the word, it has managed over the years to grow exponentially, bringing together thousands of players of various profiles and ages.

Since 2018, this unique MMORPG has been celebrating the creativity of its architects and the investment of its users by setting up temporary servers, aptly named Temporis. They offer everyone to extend their experience on the occasion of a good-natured high mass, which allows all those who wish to marry, for a few weeks, a new and ephemeral facet of a universe always a little more vast.

As the launch of the 5th edition of Temporis approaches, the opportunity was too good to look at this pocket dimension, which will be more than ever at the crossroads of different currents of pop culture.

Who would have bet, in 2004, that the Roubaix project started by Emmanuel Darras, Camille Chaffer and Anthony Roux, would take on such a scale? No one, and yet the world of Krosmoz, initiated by Ankama, will welcome its first incarnation with Dofus, and quickly attract hundreds of thousands of curious people. With a simple, but constantly enriching mythology, The World of Twelve (in reference to the deities worshiped by the original 12 character classes, now numbering 18) unfolds and comes to life.

It didn't take long for derivative products to show up, and as of 2005, it was a manga (signed Ancestral Z and ToT) that extended the experience of the MMO, simply called Dofus. The enthusiasm then grew more and more, and will allow the mythologies of the Krosmoz to be embodied in various formats. In particular via the Wakfu cartoon, Dofus: Aux trésors de Kerubim, but also a feature film entitled Dofus - Book I: Julith.

From colonies of experienced players to countless assaults by newcomers, Dofus continues on its way, always displaying a warm and coherent artistic direction. It works at double trigger, simultaneously welcoming and downright cute for the youngest users, it is also full of winks, innuendo and other references, which maintain a strong feeling of bond with old adventurers.

But what has become in recent years the great binder of this galaxy is probably the establishment of an event system to which the creators of Dofus give special energy. A few weeks a year, the Temporis server is open, and offers an unprecedented variation of this world, with ephemeral rules. For its 5th edition, this celebration will offer, between April 21, 2021 and June 22 of the same year, to discover the sparkling Ecaflip City, which will greatly renew the traditions dear to the players.

Addition of pets, which everyone can bring back to their favorite server when the time comes, as well as a whole new experience system, centered around collecting cards, essential for leveling up. Better still, there will also be the advent of Chinq, a game that will require the use of cards that players win in Ecaflip City and allow them to obtain valuable items. 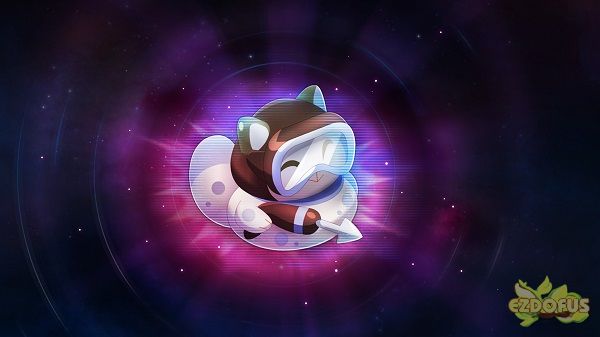 Among these, we note the appearance of Minoukis, insertable in the second slot of Dofus or trophy of each player, providers when they are associated with Ecaflip cards, of various effects, invaluable during combat. So many new things that should deeply renew the experience, including Krosmoz aficionados. 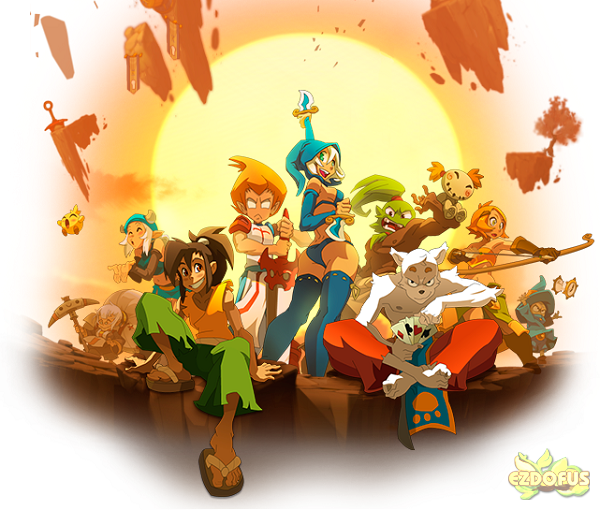 Those who rushed to pre-register, or eagerly watched for the first elements distilled during Ankama's live dedicated to the event, know that Ecaflip City is not just any alternative dimension. As the happy surname of the host of these places, Féline Vion, indicates, it is indeed a glorious Las Vegas substitute that the players are invited to. An obvious choice when we discover the different places concocted for the occasion, which brings us back to popular culture, and cinema in particular.

Indeed, your arrival in Ecaflip City will precipitate you on the luxuriant Place Principale, which is not without evoking the legendary Strip of the international capital of the game. We obviously think of the classic of classics in the matter, The Unknown of Las Vegas , and the deceptively nonchalant walks of its stars, eleven legends including Dean Martin, Frank Sinatra or Angie Dickinson. A legend that a certain Steven Soderbergh dusted off with Ocean's Eleven, still in all memories.

And for those who hope to mount hot shots or forge alliances of circumstances, the Main Square will provide access to the Chinq gaming tables, or even arcades, full of surprises. So many spaces that will awaken the memory of Croupier among the most cinephiles with Clive Owen, a fascinating story directed by Mike Hodges. Ecaflip City would not be Ecaflip City, and Vegas would not be Vegas, without the possibility of marrying, more or less fortunately, with the first or the first comer. We can bet that the most romantic weddings, under the not necessarily tender eye of Maris Presley, will end more serenely than those contracted in The Hangover, or more lasting than in Friends.

Another place will prove to be fundamental. This is Man Square, where players will find the precious Minoukis. A place that seems straight out of a sweet replay of Las Vegas Parano. A hotspot for the most seasoned, they would nevertheless be well inspired to take a tour of the Place des Celebrities, which should host the vocal performances of Féline Vion. And carry a whole imagination of our collective culture, the concerts in gaming establishments representing an emblematic setting of the 7th Art.

Inseparable from film noir, they have been featured in a number of legendary films, such as Who Wants Roger Rabbit ?. But it is perhaps the very large Casino of Martin Scorsese, with its night establishments transformed into a palace of entertainment, which has most brilliantly immortalized these places where the frenzy of gambling, the temptation of the sublime, and the beauty of singing collide as if by a miracle.

Finally, we do not know if Féline Vion will amaze Dofus players like Verhoeven hypnotized moviegoers with Showgirls, but we can bet that the scene will be in one as in the other, the heart of all passions. One thing is certain, his fate could well be thwarted, and remind comic book readers of the great Blacksad hours, who knew how to combine the items of film noir and anthropomorphism better than anyone.

We are already at the fifth edition of Temporis, and if it is no longer an absolute novelty, but an extremely popular tradition within the Dofus community, it is not impossible that this 2021 excursion has a good status. particular. Indeed, it arises in the life of the fans at a time when this formidable sandbox perfectly symbolizes quantity of simple pleasures, become inaccessible or almost, because of world health crisis.

Get together, dress up, imagine together how to play and compete. Find recipes to make the best use of Minoukis, master Chinq, have a drink while attending a concert, or simply chat over a drink in a space saturated with neon lights. So many entertainments requiring, in essence, the possibility of the collective. So many gatherings and communions that seem to us, while Temporis arrives, quite simply inaccessible.

The very idea of meeting outside and strolling through the Main Square, exploring the nooks and crannies, discovering the countless tributes and surprises hidden there brings us back to their absence in our daily lives. And finally, finding them, the time of a community dive into a common dream, is a hell of a beautiful gift. And to learn more about this temporary server, here is a specifically dedicated Twitch conference!


Have you played DOFUS? You can buy DOFUS kamas on the DOFUS website.